Lake Vostok (Russian Vostok – East) is the largest of so far identified 150 lakes under the Antarctic ice cap. It is located at a depth of 3700-4100 meters below the ice surface, under the Russian polar research station Vostok. Lake Vostok belongs to the fresh-water lakes. The temperature of water in it is -3 ° C. The lake occupies a total area of 15,690 km ² and a volume of 5.400 km ³. Maximum depth is 670 m, it is about 40-50 km wide and at the longest part it is stretched 250 km. Lake Vostok is located on the glacier, which glides at low speed and brings sediments in it. The bottom of the lake is not flat. The difference in level between its ends is about 400 meters. 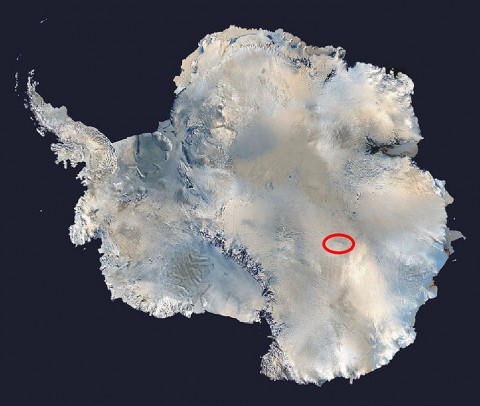 Russian and British scientists have discovered this lake in 1994. Its existence was proven in 1996 by the combined methods of radar measurements from aircraft, radar images from space and the analysis of seismic waves. Because of its location deep in the ice, this lake is considered the cleanest untouched lake. The water in it is a few million years old. Despite the average water temperature of -3 ° C water in it, it isn’t frozen, because it is under the great pressure.

Vostok research station was built in 1957. Its purpose was to study the history of climate. Russian, French and American scientists in 1990 began with drilling ice cores. Later it was discovered that the holes that were made are just above Lake Vostok. Drilling was continued until 1999, when it was stopped at about 150 meters above the lake. That decision was made to stop contamination of the lake (during drilling it was used fuel and Freon). Analysis of core drilling has shown that the last 60 meters of drilling does not make the polar ice, but frozen sea water. The age of ice is estimated at 420,000 years, and the lake is under the ice about 500000-1000000 years.

The concentration of oxygen in the lake is about 50 times higher than in normal fresh water-lake, because of the high pressure, and because of the presence of cracks in which oxygen is penetrated into the ice. Microbial fossils are 200,000 years old, which indicates that in the lake are exist (or existed) conditions for living. In 2005 researchers have discovered that the water in the lake moves to 1-2 cm during high tide and low tide, which is caused by the sun and the moon. These small water movements are providing a minimum circulation of water which is necessary for the possible survival of microorganisms.